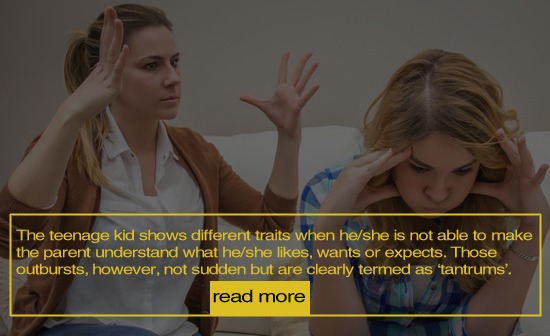 “Dad, come on! I have grown up now. I know how to handle my situations. Stop interfering in my matters, please. “

These are just a few remarks made by kids in their teens. And, seriously nothing too strange or new to any parent who either has brought up a child or is in the process of handling the kid in this age. We often name it ‘tantrums’ but I believe the most appropriate word should be ‘temperament’. It is just that the understanding level of a teenager and the parent differs and the reaction caused due to that is named as tantrums.

Most parents come at a loggerheads with their teenage children. Not that they love having arguments but just because the understanding between them seems to be lost for a while. The way we as a parent have a particular expectation from our teen aged kid, he/she too has some demands that they want to be fulfilled. And, this is the situation where our temperaments seem to be opposing each others resulting to the outbursts.

The teenage kid shows different traits when he/she is not able to make the parent understand what he/she likes, wants or expects. Those outbursts, however, not sudden but are clearly termed as ‘tantrums’.

Let’s us just glide through their so called tantrums and ponder if a solution can be worked out. Dealing Teenage Tantrums:

“No driving!” “No long hours partying!” “Friends limited and playing just time bound!” Now, these are couple of commands that parents tend to give to their growing up kids. Right? I agree there’s nothing wrong in commandments but to believe that it will be accepted easily is surely not correct. The kid is immature to understand the pros n cons that we as parents tend to know so naturally the commands will never be accepted.

Instead of commandments, why not try communication. Just give them different situations and ask for their opinion. May be things work out better when they understand!

I know such comparisons are silly because the child is too small to understand but why not take the comparison in a positive stride and prove yourself to be a better friend who is more open to listen to the kid’s feelings without grievous reactions!

“You never think about me, my wishes or my happiness!” Indeed such reactions are also very common dare you decline their request of buying a new gadget or game which their friends already have. You become the worst parent and their reaction hurts you the most. It is for one simple reason that you understand that your child must be given things that add value to his/her life but the child find other kids of his age having those things. It is the surrounding that has impacted on the child.

I would never suggest parents to succumb to their illogical reactions and provide them with anything. But out of ten demands, I am sure, one or two still can be heard of and served to them. Don’t just neglect the child, else more reactions may follow!

Kids in their teenage start believing that they are growing and they generally start separating themselves from their parents. They understand that they are independent so they begin behaving differently. But many a times they are in need of mental and psychological support and if they find that they aren’t able to get the support from their parents, they get frustrated and infuriated. In such circumstances, their emotional break down can be seen in the form of  arguments, shouts and slamming of the door at a few times.

Instead of reacting to their break downs, be considerate to them. They are in dire need of great affection then. Even if they speak rudely to you, never feel disgusted since kids are not in their stable mental state to be able to understand but you can be. In fact, you ought to be!

There are times when the teen aged kid would be feeling too disturbed. Reason not necessarily the parental obstruction or lack of goodies. But their rage increase to such an extent that they go out to threaten of leaving the house, giving up studies or food or even in worse cases to kill himself or herself.

Such situations are truly severe and as a parent you actually need to find out the real cause behind such a threat. The best way to check on such tantrums is to keep talking to the child at regular interval and let the child know that you are the best friend that he/she can rely upon!

Teenage is just a phase and in the process both the child and the parent learn different lessons. So best parenting will help both!

I am an English teacher at Amity International school Vasundhara, Ghaziabad presently. I have been a journalist with The Hindustan Times and The Pioneer in the initial years of my career in the year 1995-2000.
I have always been interested in writing, so I pursued my career with the print media but after I had my daughter in 2000 I had to leave that job. Then when she started her schooling, I took up teaching in one of the ICSE schools here. I have my own blog neamed: deepdwellers.blogspot.in.
Writing has been my passion and I write stories, poems as well as articles.
Also I have contributed to the YKA (Youth ki awaz) a platform for writers very recently on their demand. I wrote on depression which was quite appreciated.